Why might Paul be a bipolar schizophrenic? Why then might Paul be an agent provocateur? Was Paul's agenda effective? You will find he is often defending and opposing the Law within the same breadth of scriptures. R egardless of the side you take, i t is a useless exercise to defend Paul who is like a serpent chasing its own tail. While it would be very easy to add the 24 "For the Law" scriptures Paul is claimed to have voiced to add to The Nazarene Code's list of 89 scriptures to keep the Law as one of the two criteria to enter the Kingdom of Heaven, paradoxically his 26 "Against the Law" scriptures would have to be given just as much credit.

Since his For and Against scriptures of the Law completely contradict and cancel each other out, they were best left out. More importantly, his "Against the Law" scriptures fly completely against the Word of Elohim the Father and Messiah, which is why it was best to completely ignore his bipolar scriptures altogether.

The above is just the tip of the iceberg - there is far more to learn of the Pharisee Paul as you will discover below His false gospel created a heretical cult against the Word of God which in fact has produced the Anti-Christ that sits in the Vatican in Rome with billions of followers. It is the greatest irony that Christianity is as Anti-Christ as can be.


They will never admit it but it is absolutely true - no sermon goes without quoting Paul's teachings and rarely, if ever, will you here scripture spoken by the Son of God and most certainly never of the Father. Paul is frequently called "Saint Paul", or the "Apostle Paul" when in fact NO scriptures exist where he is named this by the Father, the Messiah, or the true 12 Apostles to be one - only he proclaims this. The gospel of the false apostle Paul says you do not need to keep the Law of the Father - you are automatically saved by grace which goes against the gospel of the Messiah and the true 12 Apostles.

It will be proven here beyond a shadow of a doubt that Sha'ul Paul was a shrewd, conniving, pathological liar with an agenda who infiltrated the Nazarene of the Way sect - God's true saints - winning their trust despite having persecuted and having sent to death scores of them.

Once inside, this outspoken individual became recognized as their leader then began his campaign of teaching a Lawless "gospel" which was completely against the teachings of the Messiah and the true 12 Apostles. For this reason he was nearly killed by thousands of Jews and rejected by the churches of Asia for teaching his Lawless Torah-less message. The world has been deceived by Paul's false gospel. Not so. When the serpent is tempting Adam and Eve or the Messiah, is the serpent's temptation the Word of God? Of course not. The Bible is documenting a temptation from a deceiving spirit - not quoting the Word of God Elohim.

Paul's words are no different than that of the serpent - the Bible is documenting his deceiving gospel targeting humanity to see who "buys" his false gospel over that of the Father and the Messiah. It's now our turn to be tested of our devotion and faith to the Word of God. For countless billions who "bought" Paul's false gospel, it is too late having died keeping his Lawless doctrines - in their defense however, most never knew better.

It's still not too late for you. Will you choose the Word of Elohim or that of Paul or of any man for that matter? Think very carefully about this - your Eternal Life depends on it. Once you weigh the evidence, you will never see Sha'ul Paul the same way again and you will look at his writings in a whole new light - read the material, do the research, and determine for yourself if Paul is the "Lawless One ".

Don't be afraid of the truth - your eternal life is at stake, so research this evidence thoroughly. Paul argued that circumcision no longer meant the physical, but a spiritual practice. Romans And in that sense, he wrote: "Is any man called being circumcised? Later Paul more explicitly denounced the practice, rejecting and condemning those who promoted circumcision to Gentile Christians. 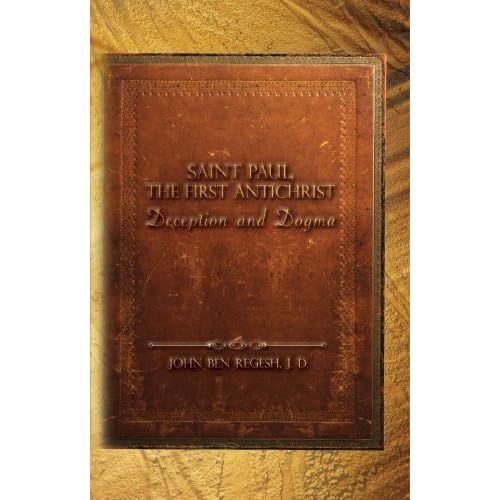 Paul warned that the advocates of circumcision such as the true Apostles were "false brothers". Gal He accused Galatian Christians who advocated circumcision of turning from the Spirit to the flesh: "Are you so foolish, that, whereas you began in the Spirit, you would now be made perfect by the flesh? Some believe Paul wrote the entire Epistle to the Galatians attacking circumcision and any requirement for the keeping of Jewish law by Christians, saying in chapter five: "Mark my words!

I, Paul, tell you that if you let yourselves be circumcised, Christ will be of no value to you at all. Thus he shortly after circumcised Timothy Acts , and he was in the very act of observing the Mosaic ritual when he was arrested at Jerusalem Acts How were they determined? Test of an Apostle? You are those who have continued with Me in My trials ; and I assign to you, as My Father assigned to Me, a kingdom, that you may eat and drink at My table in My kingdom, and sit on thrones judging the twelve tribes of Israel.

Orthodox Christianity relies heavily on these teachings and considers them to be amplifications and explanations of the teachings of Jesus.

Others perceive in Paul's writings teachings that are different from the original teachings of Jesus documented in the canonical gospels , early Acts and the rest of the New Testament , such as the Epistle of James. Proponents of the perceived, distinctive Pauline form of Christianity, include Marcion of Sinope , the 2nd century theologian and excommunicated heresiarch , who asserted that Paul was the only apostle who had rightly understood the new message of salvation as delivered by Jesus Christ. Hypocrisy is the M. Modus Operandi of the Pharisees that the Messiah pointed out repeatedly of them.


In fact, to further substantiate this assertion, fully into his supposed "conversion", Sha'ul Paul does not declare himself to be neither a "Nazarene" nor a Christian" - but rather a Pharisee: But when Paul perceived that the one part were Sadducees, and the other Pharisees, he cried out in the council, Men and brethren, I am a Pharisee, the son of a Pharisee : of the hope and resurrection of the dead I am called in question. For they preach, but do not practice. They will receive the greater condemnation. For you are like whitewashed tombs which on the outside appear beautiful, but inside they are full of dead men's bones and all uncleanness.

For you build the tombs of the prophets and adorn the monuments of the righteous, 30 and say, 'If we had been living in the days of our fathers, we would not have been partners with them in shedding the blood of the prophets.

The Apostle Paul Was A Deceiver

Matthew Woe unto you, scribes and Pharisees, hypocrites! The final scripture above, Matthew , describes Paul's ministry who traveled sea and land to convert Gentile proselytes. All mainstream forms of Judaism today consider themselves heirs of Rabbinic Judaism and, ultimately, the Pharisees. The following 2 videos reveal the nature of Pharisees whom Paul declared himself to be during his "ministry" whose practices inspired the Talmud which is Anti-Christ, deeply perverted and Satanic in its practices.

Submission to Governing Authorities. The authorities that exist have been established by God. Do you want to be free from fear of the one in authority? Then do what is right and you will be commended. But if you do wrong, be afraid, for rulers do not bear the sword for no reason. Besides the obvious fact that the word "rapture" is no where to be found in the bible, nor is there any mention of anything remotely to one by the Father, the Messiah, the prophets, nor any of the true apostles, we of course have the false apostle Paul to thank for what has been construed to be the "blessed hope" of a rapture.

It is not surprising that the 'apostle of christ serapis ' and false prophet 'Paul' had to write a second letter to his deceived Christ-ian Thessalonian followers in order to try and explain away the fact that the 'Rapture' had not happened as he previously FALSELY prophesied. More on the subject from the lips of the Messiah:. Matthew As therefore the tares are gathered and burned in the fire; so shall it be in the end of this world.

And it is only at the end of the world that the separation takes place. The pre-trib rapture theory is completely false. For as in the days that were before the flood they were eating and drinking, marrying and giving in marriage, until the day that Noe entered into the ark, and knew not until the flood came, and took them all away; so shall also the coming of the Son of man be. Then shall two be in the field; the one shall be taken, and the other left.

Is It Possible To Recognize The Antichrist?

Two women shall be grinding at the mill; the one shall be taken, and the other left. Watch therefore: for ye know not what hour your Lord doth come. This is such a misunderstood passage of scripture today. Take a look at the context of the above Bible verses. Do you see that Jesus is telling us that His second coming will be like what happened in Noah's day? And what happened in the days of Noah?

The above verse tells us. Who was "taken away" and who was "left behind" in Noah's day? Take a look at the above verses again. And this is what Christ is pointing us to.

Acknowledgments References. Paul lived during the first century CE. It has been speculated that his religious experiences resulted from temporal lobe epilepsy. He manifested increased religiosity and fears of evil spirits, which resembles paranoia. These features may occur together, in association with primary and mood disorder-associated psychotic conditions.

We propose that he perceived an apparition or voice that he understood to be a harassing, demonic messenger from Satan. This perception might have afflicted him with some amount of negative commentary of the type characteristic for psychotic conditions, resulting in psychological distress. Paul does, however, manifest a number of personality characteristics similar to the interictal personality traits described by Geshwind,48—50 such as deepened emotions; possibly circumstantial thought; increased concern with philosophical, moral and religious issues; increased writing, often on religious or philosophical themes; and, possibly, hyposexuality 1 Corinthians —9.

These characteristics are controversial as to their specificity for epilepsy,51,52 with a preponderance of larger studies not confirming a specific personality type associated with seizure disorders.